The Google Pixel Watch and the Samsung Galaxy Watch 5 are two higher-end Android watches taking aim at the Apple Watch’s dominance in the smartwatch space. Both run the latest version of Wear OS, have a round display, track similar workouts and have many similar health sensors. But how do these two Android watches compare when using them in the real world, rather than just looking at specs on paper?

The type of Android phone you have could also affect your choice, because as we’ll explain later, Samsung’s Galaxy Watch has a few features only available when you also own a Galaxy phone.

Both may be round watches, but there’s much more separating the design of these two wearables. The Google Pixel Watch features a curved screen, and it has a sleek wristwatch look complete with digital crown and side button. The Samsung Galaxy Watch 5 has a flat screen with two side buttons. Rather than a crown, it features a virtual touch bezel around the screen. Move your finger around the bezel to navigate between menus and options.

Comfortwise, the Pixel Watch looks and feels better on my small 152mm wrist, especially for sleep tracking, but it might be too small for some wrists. That might instantly make you look for a larger watch and sway the Galaxy Watch 5 (or even the larger 45mm Galaxy Watch 5 Pro) in your favor. 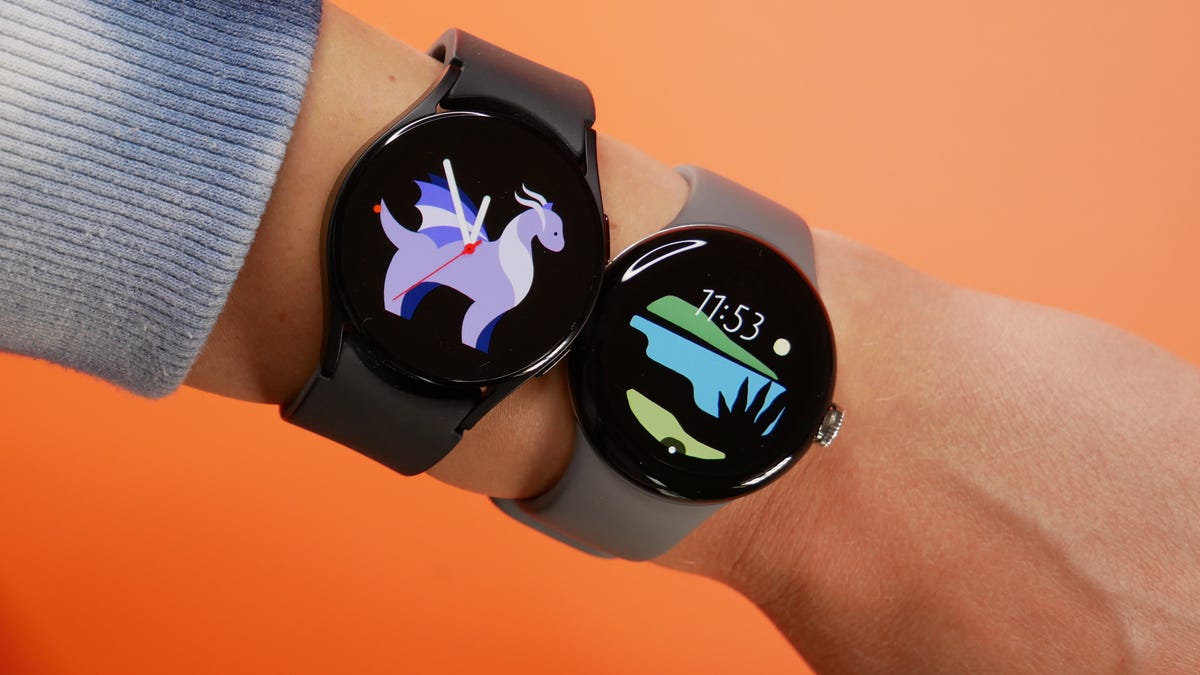 Both watches look good on a small wrist, but only the Galaxy Watch 5 comes in a larger 44mm size for bigger wrists.

Much has been made of the bezel around the Pixel Watch screen, but it’s only really noticeable when you have a watch face with a lighter background. Don’t forget that physical controls like the Pixel Watch’s crown are easier to control if your hands are sweaty or wet, especially during a workout, unlike the Galaxy Watch 5’s touch bezel that doesn’t really work well at all with any moisture on your fingers.

Each has a bright OLED screen that reaches a maximum of 1,000 nits. That means they are both super-easy to see both in direct sunlight. They can also remain always-on, which is nice if you want to avoid raising your wrist or tapping on the screen, but of course that does affect battery life.

Watch faces are another way to change the look of your watch and there’s not as many first-party options on the Pixel Watch as you’ll get on the Galaxy Watch. However you can get third-party ones through the Play Store.

There’s a speaker and mic on both: You can take calls, dictate messages, hear notifications read aloud, but only the Galaxy Watch 5 lets you play back music from the speaker. Overall I find it easier to use the full-size QWERTY keyboard on the Galaxy Watch 5 to send messages and input text, as it’s a hair bigger than that on the Pixel Watch. 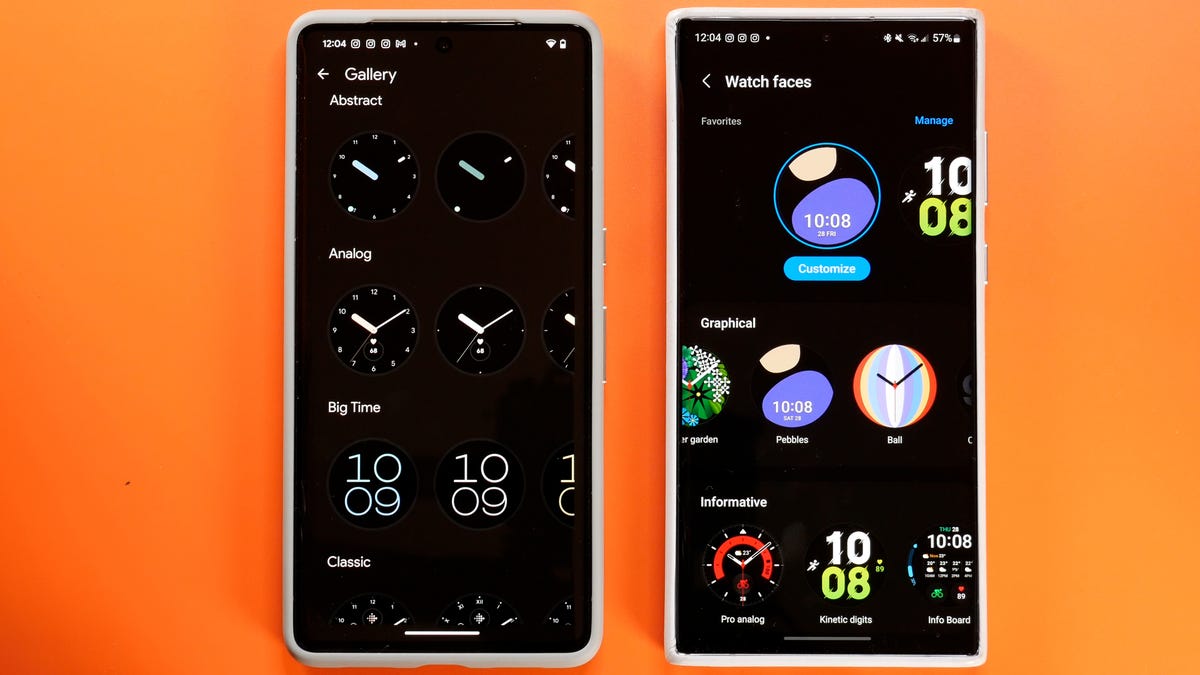 The selection of first-party watch faces on both the Pixel Watch (left) and Galaxy Watch 5 (right). You can also download a range of third-party options from the Play Store.

These two watches do all the basics: track steps, calories, sleep and multiple workout types. The Pixel Watch really relies heavily on Fitbit’s interface and ecosystem for its workout tracking, so you’ll find all your health data consolidated in the Fitbit app. The Galaxy Watch 5 uses the Samsung Health app. You can also elect to use Google Fit on either, but you will get the most robust experience using each company’s proprietary app.

This is totally subjective, but I find the Fitbit app much easier to use, and it surfaces my data in a much nicer way than the Samsung Health app. It’s easier to see and understand sleep tracking metrics, my step count and workout metrics.

On the flipside, the Galaxy Watch 5 can automatically detect outdoor activities like walks and runs. I find it extremely reliable, always prompting me to start a workout if I forget. It’s something I really miss when using the Pixel Watch as it doesn’t do this — even though other Fitbit trackers can. 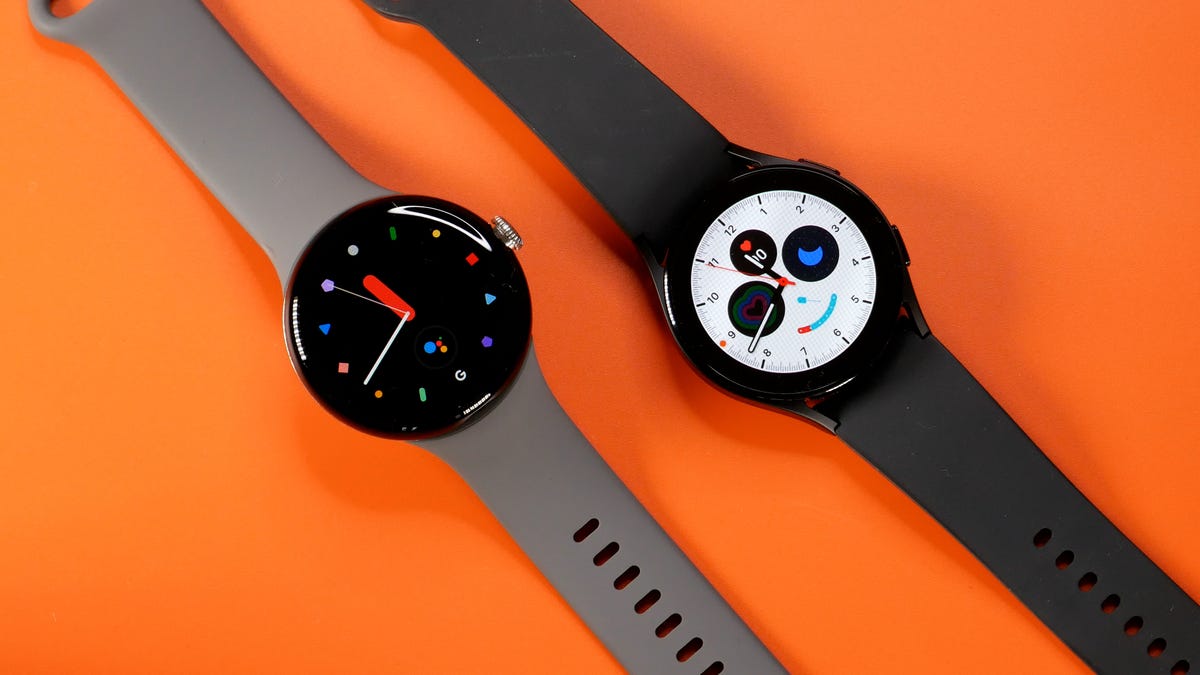 The Galaxy Watch 5 also has additional sensors that some might value, like bioimpedance to measure body composition. There’s also a temperature sensor, but that isn’t active at the time of this comparison. There’s also an ECG, or electrocardiogram, app, but you’ll need to have a Galaxy phone to use it unless you sideload the Health Monitor app on another Android phone.

The Pixel Watch also has an ECG, but it works on any Android phone natively. Both watches also feature a blood-oxygen tracker, but that’s not yet active on the Pixel Watch. It also doesn’t feature high and low heart-rate alerts, or irregular heart rhythm alerts like the Galaxy Watch 5.

For tracking workouts without your phone nearby, GPS is built in to both, and they each lock onto a signal within about five seconds of being outside. The Pixel Watch was more accurate in terms of calculating distance when compared to a control phone, but things like steps and pace were all within the same range as each other.

Heart-rate sensor accuracy is also closer to a chest strap on the Pixel Watch compared to the Galaxy Watch 5; the Pixel is the watch I’d choose if I wanted the best results for a cardio workout.

Sleep tracking is also superior on the Pixel Watch, based on my many nights wearing each watch on my wrist. Not only is the sleep score way more indicative of the overall quality of my sleep, but the Galaxy Watch 5 continues to give me alarmingly low blood-oxygen at night, in the 70% to 80% range, which could indicate potential signs of a sleep disorder (which I don’t have).

One potential ongoing cost for the Pixel Watch is Fitbit Premium, the $10-per-month subscription service that gives you workouts, recipes and in-depth interpretations of your health data, like the daily readiness score and more sleep data. You can use the watch without it, but remember, the Galaxy Watch 5 doesn’t need a subscription. You get six months free Fitbit Premium with the Pixel Watch. 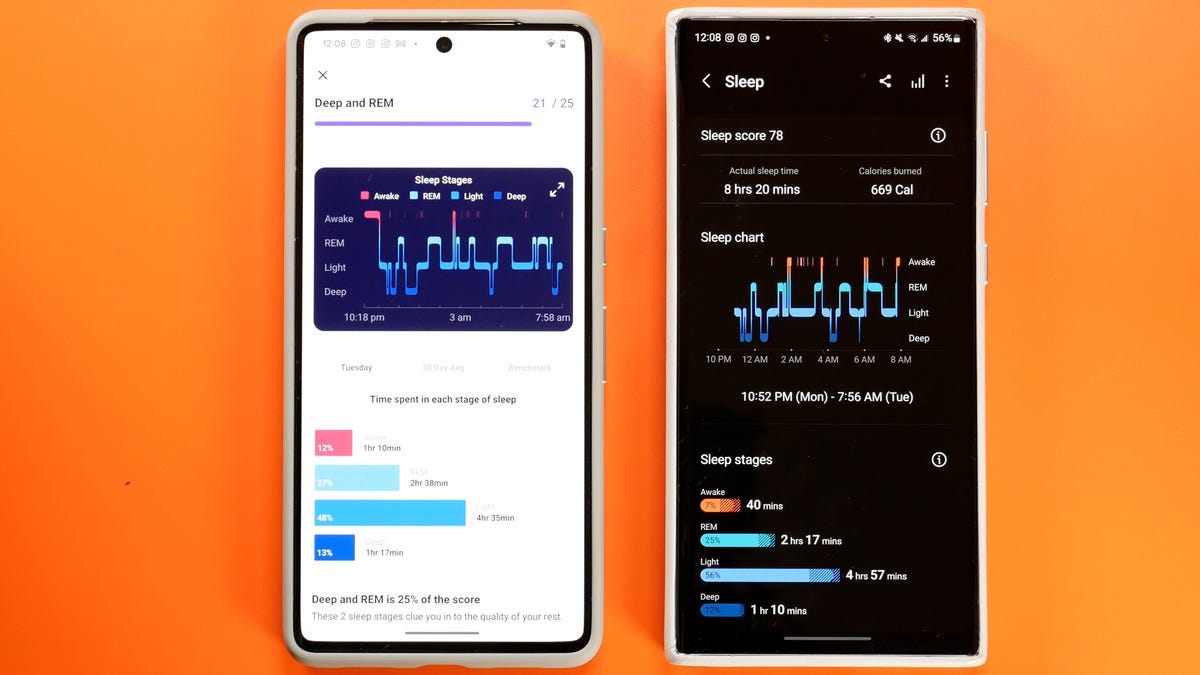 As always, battery life will vary depending on how you use your watch. For general use, which includes the always-on display, notifications and a one-hour GPS workout I can get 21 hours on the Galaxy Watch 5 40mm version and a maximum of 20 hours on the Pixel Watch. Generally you’ll want to top up both before you track your sleep, especially as the Pixel Watch drops more than 20% battery life overnight.

Without the always-on display and no GPS workout, expect around 24 hours on the Galaxy Watch 5 or 26 hours on Pixel Watch. In CNET’s review, Lisa Eadicicco was even able to get 28 hours under similar conditions. You’ll get even more battery when using the 44mm Galaxy Watch 5, closer to 30 hours under similar conditions with the always-on active. I’ll update this article with LTE results when available.

The Galaxy Watch 5 supports reverse wireless charging, so you can put it on the back of some Samsung phones to top it up. Speaking of charging, the Samsung watch goes from flat to 45% in under 30 minutes, and it takes about 1.5 hours to reach 100%. The Pixel Watch recharges at a comparable rate, taking at least 30 minutes for the same 45% charge and about 1.5 hours to reach 100%. Neither come with a USB-C charging brick.

Both watches let you store music, though the Pixel Watch only supports downloading from apps like Spotify and YouTube Music, while the Galaxy Watch lets you transfer your own music files from a phone. Mobile payments are available in Google Wallet on both, or you can add Samsung Pay on the Galaxy Watch 5. There’s a whole suite of third-party apps available on both watches when downloading from the Play Store.

The Google Assistant experience is mostly similar between the two, but the Pixel Watch is a smoother, more seamless experience, especially when paired with a Pixel phone. You can also use Bixby with the Galaxy Watch 5 if you want.

Neither of these watches use the latest processor. That’s not necessarily a bad thing, but to me the Pixel Watch doesn’t feel as snappy as the Galaxy Watch 5. It’s definitely not slow, but sometimes it feels slightly less-responsive compared to the Samsung watch, especially when using multiple apps and multitasking. 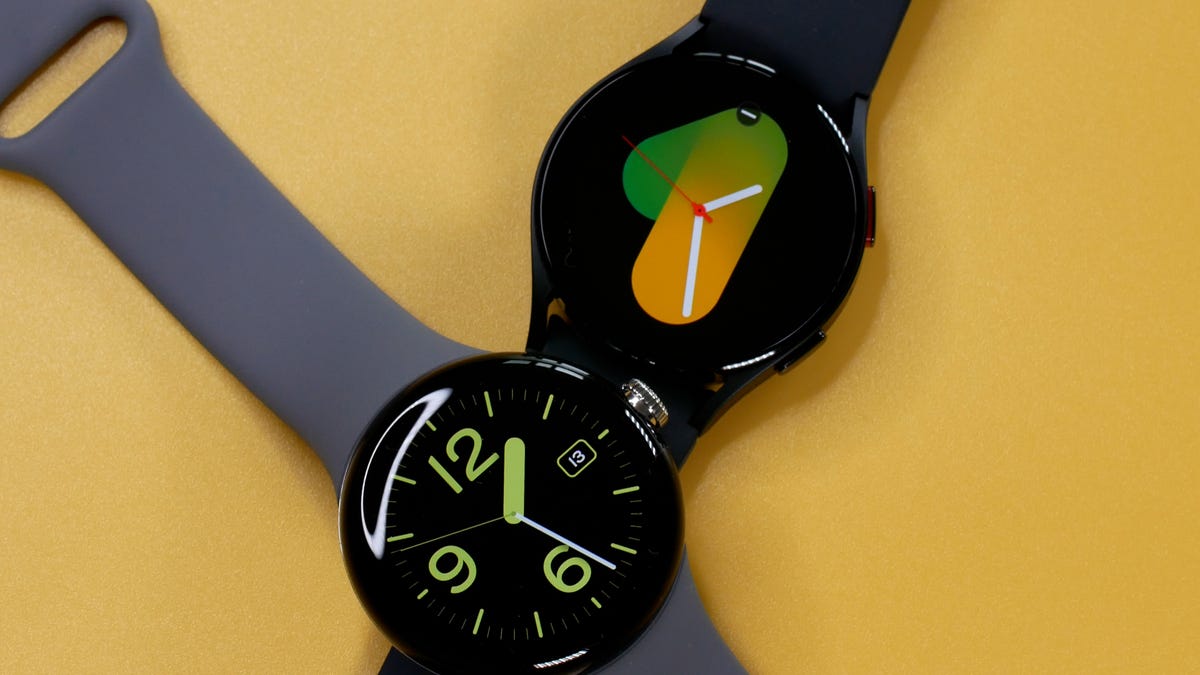 These are both excellent Android smartwatches, but each is better suited to slightly different use cases. The Pixel Watch arguably looks nicer and has better heart-rate tracking, GPS tracking and more refined analysis of your sleep and health metrics. But it only comes in one size and the battery life is really not as strong as it should be for the price.

The slightly cheaper Galaxy Watch 5 doesn’t add any game-changing features, but it might be the better choice if you already have a Galaxy phone. It also comes in several sizes and has some extra sensors the Pixel Watch lacks, like its bioimpedance and temperature sensor — as long as that last one gets turned on at some point.

Amy Childs And Billy Delbosq Are Expecting Their Twin Child –

What is Giancarlo Granda’s Net Worth? –

Please consider supporting us by disabling your ad blocker